The 15th of October 2002, I transferred a PHP/MySQL website via FTP. On the first domain name I ever bought.

I then spent my first Bachelor’s year summer holidays to learn copy/pasting programming PHP. What emerged at that time was a handmade PHP/MySQL frontend and a tight backend to let a few and trusted people to contribute content.

The year after, in 2003, a wise core contributor suggested the idea to let the website members submitting their own retrogame reviews. This is what happens when you listen to Amiga fans (Atari ST gamer speaking)!

Creating the website and experimenting the leadership of a team eventually led me to my first job right after my Bachelor. Web Developer.

Life went on and the audience grew. From hundreds to thousands daily visitors. From a shared hosting to a dedicated server. A Linux box with a Plesk interface I could barely understand. It ipened my eyes on the underlying strings of the EasyPHP puppet: that PHP, MySQL and Apache were three different things. The loss of content when you reboot a server when people submit content. iptables. CSRF. XSS. Denormalising database schemas. That nesting MySQL queries in PHP code is easy but kills off your server as the audience grows. That an ALTER TABLE impacts data integrity and your sanity to double check every database query in your spaghetti code.

Eventually I quit my first job for another one (blogpost in French). 2007. Because I was offered to join a team of highly skilled people. The ones I was reading the blog of. They shared their vision. They shared their knowledge. They gave me even more passion: @xavierlacot, @n1k0, @biologeek, @trivoallan, @nsteinmetz and @clochix, to only quote them.

I discovered the Symfony framework. The milestone 1.0 recently landed at that time. Magical words: OOP, MVC, ORM. Singleton are cool. Singleton are bad. The rise of jQuery. Learning to copy/paste program JavaScript thanks to jQuery. Definitely moved from Windows to Ubuntu (blogpost in French).

I was not a student anymore. I was a fucking consultant. So I spent two weeks on leave to achieve this bright goal. And failed miserably. Not that it was not doable. But the scale of the project changed. The scope changed. But I was still one and only one.

From scratch does not feel the same when you have years of content you can’t get rid of. Using plugins? Yes of course. Except they were doing either too much, had terrible performance or provided an horrific user interface. Creativity through the constraint they said. Except I was running out of time. Except I was having the feeling to spend too much time on things I achieved faster in the past.

We’ll see tomorrow. Or the day after. When I’ll have time.

Anyhow, in order to satisfy the need of change, I used some new knowledge to improve the website. A happy patch. Which would not stop the code to age. Nor the team members to age too. The motivation to scaffold something new regularly decreased as the task seemed bigger and bigger.

Time flew. Quit my job again. 2010. Became a freelancer. Less time for that leisure stuff. Priorities changed. Symfony 2 went out. Definitely not RAD. Got sick at writing complicated code to achieve a simple task. The feeling to be even less productive with an evolved tool. Created a startup. Got robbed. Shit happens (and if it had not happened yet, it will do anytime in the future).

Duke Nukem Forever. 2011. The game is out. Finally. It even bet me at releasing.

Meanwhile, 2012. WordPress continue its popularity ascension. I admitted this tool could totally fulfill our needs. Instead of restarting from scratch I could just twist WordPress to fit Emu Nova’s content inside. Shitload of plugins later, it was definitely too much work for highly interlinked contents. Contribution was not handy.

So again, the magic out-of-the-box-without-any-line-of-code could not replace the brain logic.

The simplicity of Node.js and ES5 by default had the same effect on me as Symfony 1.0 at the time: I rediscovered programming (and JavaScript). Breaking the classical inheritance system. Prototype FTW. CommonJS modules. NPM. Patterns. Even more patterns. Tests. The cost of synchronicity. The beauty of the semicolon. RAD again! At least!

End of August 2013. A guy on Emu Nova forums wrote: no activity since a couple of months, isn’t it time for a shutdown?. Meanwhile, I attend Reasons to be Creative. Sketched wrote in a corner of a page. I found my reasons.

Motivation came back. Energy and everything.

The challenge emerged: thousands of statically generated HTML pages based on open contributed contents. Something which would be an archive by default. And not something you would like to archive at some point if it fails to work.

Content is about representation. Raw. Processed. Targetting a machine. Targetting people. Both at the same time. Text. HTML. Whatever.

§What is a backend application?

When you think about it, this is exactly the same relationship between a committer and git.

When you think about it. This is exactly what enables Github with code content. Code is interpreted/compiled content. Your brain is a massive CPU. So let’s program it!

Both npm modules. Both generating outputs. Data. Ready to be consumed data.

§One Month to Build and Deliver

One month is a limited timeframe. Especially when you have a day job. The MVP had to be something clearly simple: neat HTML interface, straight to the point and essential content only. 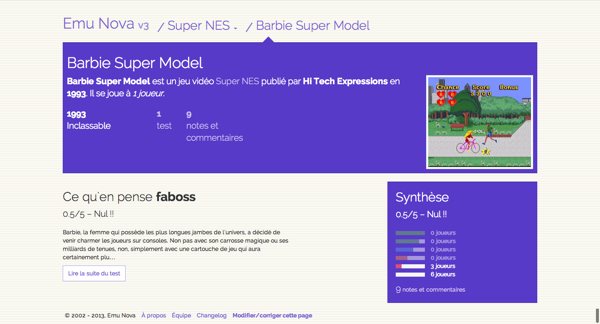 People understand decisions if they are included in their scope (especially when it’s about details and low priority things).

People feel less constraints as they can submit a modification proposal for any content. It increases their motivation because they had never such a low bareer to be part of something they like. They feel positively empowered. Because the owners trust their effort and welcome them.

It is the Pull Request Hack applied to everything: the frontend, the backend and the data!

Fearing London buses is not an issue anymore.

Builds are automated with Travis CI. They last 8 minutes:

This is serious improvement. It took roughly 30 minutes prior to this migration. Hugo development server makes local development way easier.

Details of the migration can be found in this Pull Request.

Common patterns are diffused among those 10 years. Sharing. Caring. Contributing. It connected me to job opportunities, to people, to knowledge.

I wonder what my life would have been if as a student, I’d have prefered being lazy and sticking to the regular tuitions instead of exploring the cool stuff the Web was proposing (yep, the Web was already amazing in 1996).

Anyway, a couple of things will be interesting to explore:

I hope it gave you inspiration to craft your ideas to your own domain, using this shared experience :-)