My last day at the BBC as an employee is December 31st 2016. I handed my resignation letter on September 13th and thought I would share a few artifacts of my resignation.

For the readers and for my future self.

Resigning is tougher than expected, especially when one still continues to believe in their employer’s project and mission.

I found that best is to share honest emotions and to keep the door open for further collaboration. 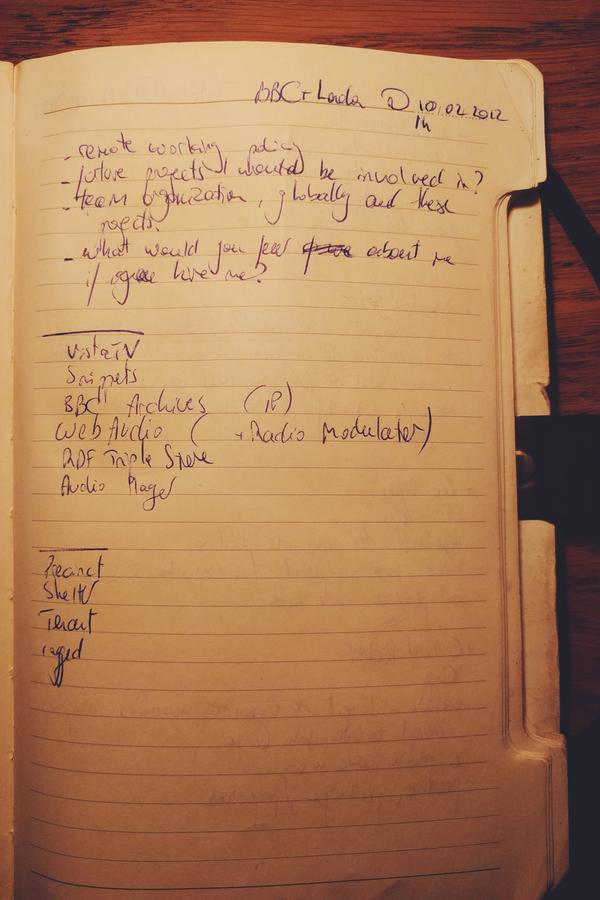 I sent this document on September 13th 2016. It was intended to be handed over to BBC HR by the head of the section.

I wanted it to be succinct and to denote the ample delay while waiting for a better moment to announce my departure to my colleagues and former colleagues.

Please accept this letter as notice of my resignation from the position of Senior Software Engineer (Grade 9) at BBC R&D.

My employment contract specifies a one month notice period, however I would like to extend this to four months, to be effective December 31st 2016. I hope it will ease the transition and to offer enough time to find my replacement as well as I am confident it should let enough time to complete the projects I am currently working on.

I have deeply enjoyed being a part of the team and am thankful for the opportunities you have given me during my almost four years in IRFS. I feel grateful to the BBC for the incredible ecosystem it provides and for enabling foreigners to be part of this adventure.

Again, thank you for your trust,
Yours sincerely, 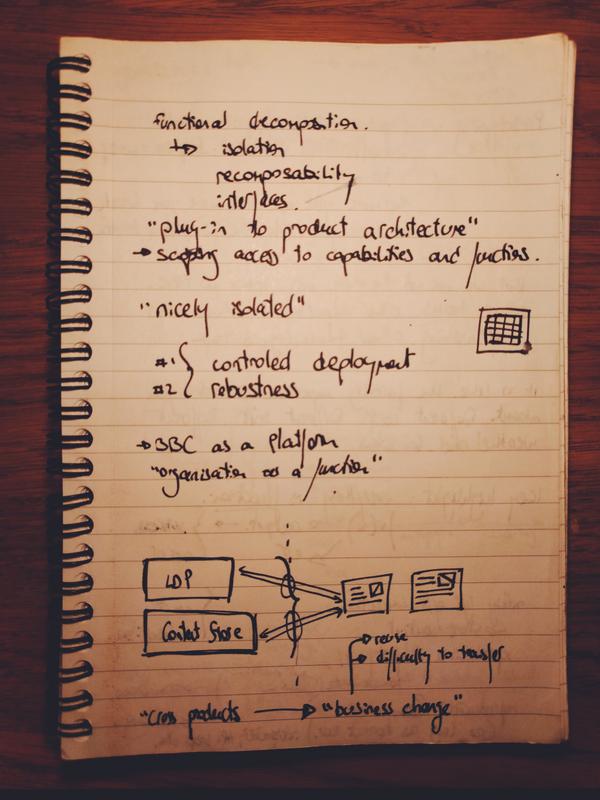 Although a formal letter is enough to register the resignation, I wanted to expand more on the reasons which motivated the move – I respect the trust put in my person since I have been hired so it seems important to me to echo this trust back.

You will find my formal resignation letter in attachment to this email that I intend to come as an expanded version reflecting my personal thoughts and feelings.

First, it has been a tough decision to come to terms with the idea of leaving and of writing this document. Especially as for me, moving away from my current position at the BBC represents a leap towards uncertainty.

I consider having had an extraordinary chance of being part of a multidisciplinary team of designers, engineers, researchers and producers – it has confirmed my love for innovation and mixing skills to achieve great purposes. It has inspired me to move on from the BBC to create an innovation company dedicated to public services with two friends. I believe designing and prototyping in short iterations with a small, multidisciplinary and embedded team provide the best test bed for an idea to grow and eventually to mature as user-centric products.

I chose to give such an advance notice because if it can help, I would like this resignation to help making Christina move to a continuing contract instead of a fixed-term one. I believe she has a great potential which can lead to great outcomes in IRFS.

I am well aware of the time it takes to renew a contract. I hope this will help find a replacement in good conditions, cause as little delay as possible on goal completions and have minimal impact on team dynamics.

I believe IRFS have developed great technologies and prototypes, but I have the feeling they are more hidden than impactful.
I would be glad to discuss how my next non-profit adventure could work a research partnership to apply BBC technologies within the non-BBC world, to help nurture social innovation.

Finally, I notified Nicholas of my goals for the next few weeks:

I am always up for discussions, I would be glad to buy you a coffee and have a chat to arrange the next weeks of work before my contract ends.

Again, thank you for everything, 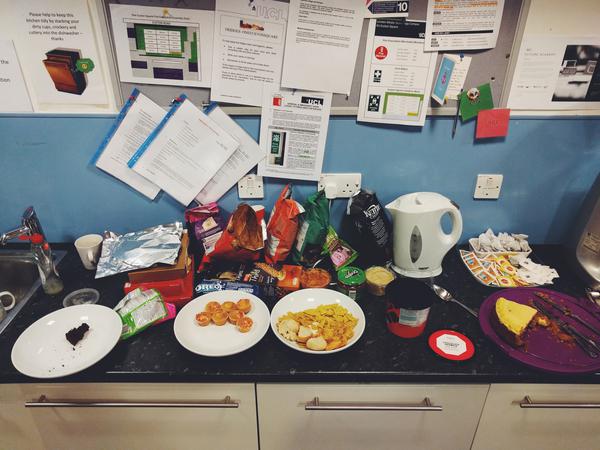 It is tedious to live with a secret; I finally delivered the news to my colleagues on October 31st 2016 – a month and a half later. I kept it short while reflecting back on what I valued since I joined the company a few years ago.

In exactly two months, I would have completed my last day in the office, my last day in R&D, my last day at the BBC. It is a company I never thought I would be good enough to work at, especially as being a native from a country foreign to scones, hand cut chips and proper crisps (aka real life).

I have learnt a lot, hopefully gave a lot, and got inspired enough to carry on innovation for the public sector by starting my own innovation company with two friends. I believe the BBC can be bolder than it is, and I hope it will shine even more beyond its own territory.

I will focus my last two months on making the remainder of my time a useful legacy for open source at the BBC, as an extent of the editorial algorithms project and previous projects I worked on. My last day will be the December 31st 2016, and I might advertise some leaving drinks date and location by then.

Someone once told me I was a “space cadet”. I feel I am a rookie right now. 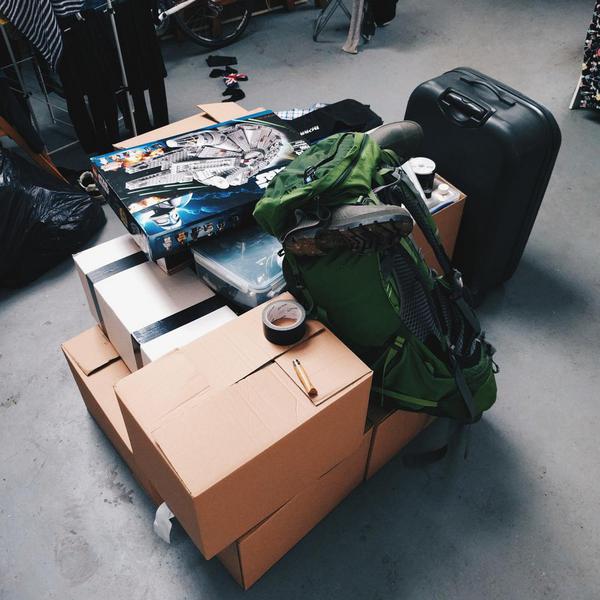 Finally, I sent an email to inform why we should go for a pint. I twisted the tradition by inviting some friends as well – mostly because I knew they could blend in the cultures and the conversations.

As you may know, I am off the BBC at the end of December for pastures new after almost 4 years — 4 years! I thought I would never be good enough to stay even a month.
This is sad but this is nonetheless a good time for us to both cheer up and to celebrate the upcoming winter holidays.
This is a good time to see each other’s face, for the pleasure to talk and to relate to some nostalgic stories or whatever — stories always come with a pint or two.

I will try to summon a few slides during our Section meeting and recap what I learned, in general, since I started living on the British soil — roughly 2 days before my first day of work at the Beeb !

Beyond the December 29th, you can reach me on Twitter (@thom4parisot), by email (see contact), by snail mail (from March and onwards).
Keep posted on https://dtc-innovation.org/ — hopefully I will manage to get some nice stuff done with my partners .

I have had a tremendous pleasure to be part of, what is to me, a true public service company.
Leaving is also a way to infuse and to echo my learnings elsewhere.

See you next Thursday, or later! 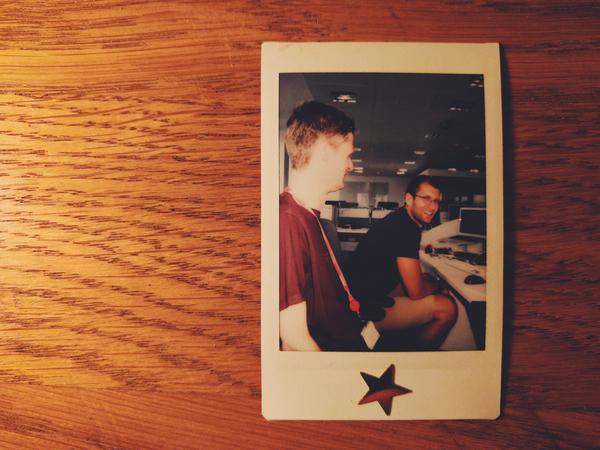 I scribbled a few things in a notebook to prepare myself a bit. I was not only happy and proud to have worked at the BBC but I was also happy to have discovered so much – and so little – about British culture and even my self-development by joining in in March 2013.

I wanted to convey these learnings and to highlight how beneficial they have been to me.
Here is a selection of these happy discoveries – in no specific order:

None of this contains the trace of my emotions when I had to speak in front of my soon-to-be ex-colleagues. I can still hear my voice derailing on the last sentence. 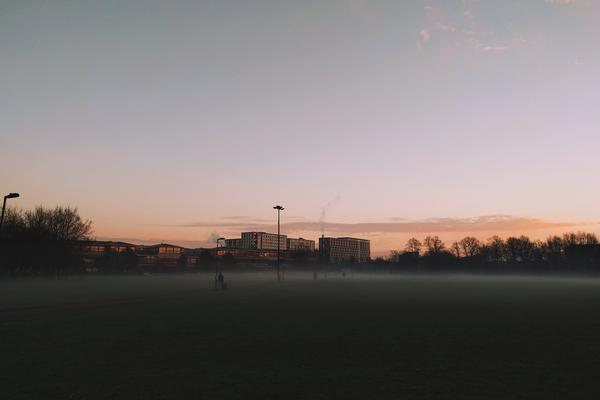 §You Leave Only Once

I had a hard time announcing I was leaving the BBC. It has been such a helpful moment to rebuild my self-confidence after our startup died – people valued me because I was at the BBC. Would it still be the same if I did not belong to it anymore?

With all the good, the bad and the ugly, I think the BBC is a model of public service. I am definitely proud and thankful for having been part of it… this is now my longest professional experience.

I will now take a two weeks break before resuming my work on my french Node.js book during a nomad residency.